MEETING WITH ARMEN GHULARYAN, THE CHAIRMAN OF THE RA URBAN DEVELOPMENT COMMITTEE

On July 1, the RA Urban Development Committee, headed by the Chairman of the Committee Armen Ghularyan hosted the delegation led by Yeghiazar Vardanyan, the Rector of National University of Architecture and Construction of Armenia.

During the meeting Armen Ghularyan, the Chairman of the Committee and NUACA Rector Yeghiazar Vardanyan discussed the new prospects for cooperation.

An entire series of events, dedicated to the 100th anniversary of NUACA, the first of which is envisaged to be held at National Museum-Institute of Architecture after Alexander Tamanyan of the RA Urban Development Committee, was on the agenda of the discussion-meeting, the organizational details of the event, as well as the materials to be presented at the exhibition were also discussed.

Activities, aimed at the Certification of NUACA laboratories and the possibilities provided by the RA Urban Development Committee to support them were discussed, an agreement was reached to organize a visit to NUACA laboratories in the near future.

The guests were introduced to the process of the amendments and supplements to the RA Laws “On Licensing” and “On Urban Development”, as well as the possibilities of NUACA participation in the processes of Continuous Professional Development and Certification of Specialists, in case of the adoption of amendments in the above-mentioned Laws, were discussed. 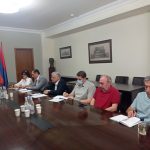 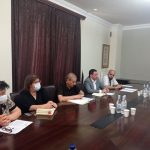 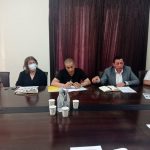 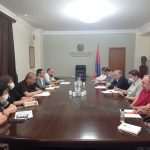