The National University of Architecture and Construction of Armenia hosted the newly appointed Chairman of the RA Urban Development Committee Armen Ghularyan, the newly appointed Deputy Chairman David Grigoryan and the Head of the Licensing Department Nshan Martirosyan.

A discussion was held with NUACA administration, aimed at solving the priority issues of the sphere, expanding and strengthening the cooperation between NUACA and RA Urban Development Committee.

Chairman of the Committee A. Ghularyan expressed his readiness to implement joint programs, emphasizing the importance of bilateral cooperation. NUACA Rector Yeghiazar Vardanyan noted that, within the limits of its liabilities and capabilities, the University is ready to participate in the programs proposed by the Committee.

An agreement was reached to make such meetings more frequent in order to solve sectoral problems within educational and administrative circles. 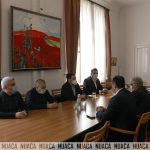 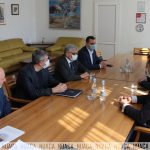 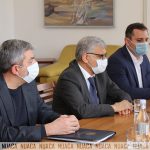