VIGEN GEVORGYAN — THE HERO WITH A BIG HEART AND BRAVE SPIRIT

It is difficult for Karen to talk about his brother, who fell in the war, but at the same time it is also exciting. He remembers his brother with a smile. Karen is silent for a long time, unable to find words to characterize his brother, to describe his big heart and generosity for everyone.

A student of the Faculty of Management and Technology of our University and a future economist, Vigen Gevorgyan, was in his first year of military service when the bloody war broke out. Vigen’s brother tells that he was not in Artsakh that day, he was in the hospital in Yerevan. “He called me and said anxiously that he was returning to Artsakh, there was a war and his friends needed his help.” And he hurried to the front on the same day, the way he hurried to serve in the army when he turned 18, ignoring the problem of the leg that always accompanied him. Vigen had so many positive and humane qualities, he was so noble and honest, that his brother confesses he would like to have a big heart like Vigen. There was no difference for him, be it a father, mother, grandparents or just a passer-by, Vigen rushed to help if needed.

Optimism, great faith and friendliness had not left him even in the flames of war. “When we talked on the phone, he said that everything was fine, he had been through a lot of troubles and was still alive, so he would survive.” But the war is ruthless, blind and deaf to human pain, dreams and life.

Vigen faced that devastating war. He fell, died like a brave man and became a glorious hero. We bow down before your patriotism, your honest struggle and feat.

Eternal glory to you, immortal hero! 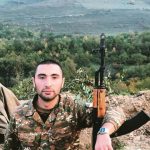 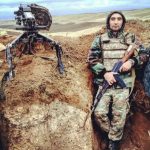 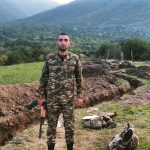