THE NUMBER OF CLASSES OF FOREIGN LANGUAGES WILL BE DOUBLED

At the National University of Architecture and Construction of Armenia, the top priority has always been to improve education quality and student services.

For this purpose, today’s meeting with the Chair of Languages and the Centre of Languages was set up, attended by the Acting Rector of NUACA Yeghiazar Vardanyan. In order to improve students’ language skills and to assess the language proficiency of each of them, firstly, a decision was made to double the number of classes of foreign languages and secondly, groups will be formed according to language proficiency levels. Each group will be taught by an appropriate academic program and at the end of the semester, the students’ progress will be assessed, whereby a student who completed the program and developed high performance will be moved to the next group with a higher level. After graduating, the University will award each student a certificate according to one’s language proficiency level 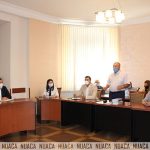 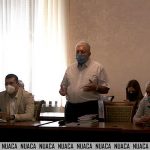 11.05.21
INFORMATION FOR NUACA APPLICANTS
11.05.21
NUACA STUDENTS’ SUCCESS AT DataArt OLYMPIAD
10.05.21
SALARIES OF UTILITIES AND SERVICE STAFF WILL INCREASE
10.05.21
ANOTHER INTERESTING SEMINAR WAS HELD