“Business Dialog” Company organized an award ceremony with its international partners. The slogan of the event was “Let us Make our Country Better”.
First of all, the international partners of the organization were shown on the big screen, who were given the chance to make their welcoming speech only online because of the pandemic. Five welcoming video speeches were made- by the General Director of Canadian “Top Ten Award” Organization, Head of the National Standardization Body of Bosnia and Herzegovina, Quality Organization of Russia, Presidents of National Standardization Body of Slovenia, and the representative of “Russian Register” Association. Then Doctor of Law, founder of “Business Dialog” Yenok Azaryan made a welcoming and opening speech. After the speech of the latter, the award ceremony commenced.
In the nomination ”Painter of the Year”, the “Face of the Country” was RA people’s and honorary painter, Professor of the National University of Architecture and Construction of Armenia, honorary member of the Russian Academy of Fine Arts Hrant Tadevosyan. The award was handed to the master by RA honorary artist Ara Gevorgyan. 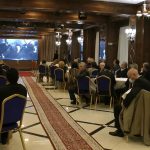 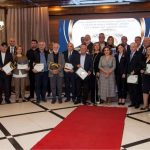 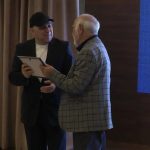