Our university in the center of the american armenians’ attention

Establishing new ties, being  recognized on the international platforms, being transformed into a scientific-industrial center from merely a scientific-educational  one as the result of numerous new and specialized laboratories’ functionality is the most important principle and driving force of the NUACA.

Today for that reason our University hosted Razmik Garakanyan, the CEO of  the ” Armenian Engineers and Scientists” and Eddy Atoyan, the founder of “Atoyan and Association” company. Rector Gagik Galstyan and the vice-rectors  met with the guests and discussed further projects of mutual interest.

First and foremost, the American-Armenian specialists were interested in faculty, educational process and of course laboratories of our University, and after touring they expressed their honest excitement about done work and outcome.

Razmik Garakanyan and Eddy Atoyan did not visit us coincidentally at our university. They were here for cooperation and support to the establishment of ties among our and world leading universities as well as with the special mission of bridging Armenia and Diaspora.

Taking into consideration the fact that Gagik Galstyan is a builder and the President of the RA Builders’ Union R. Garakanyan and Ed. Atoyan offered their support and by using the experience of leading countries to utilize solar energy and make it affordable for everybody shifting the issue into the legal field.

Perspectives were optimistic, discussed themes were for the sake of nation and bright. At the end of the meeting the American- Armenian guests ascertained that upon any opportunity they would spread a word for our University both in the USA and in the best higher educational institutions of the world. 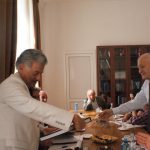 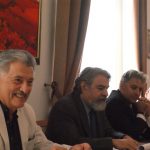 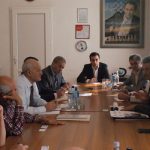 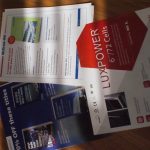