“OUR BLOOD IS VICTORIOUS, SO VICTORY IS NOT FAR”: THE STORIES OF HERO STUDENTS CONTINUE

The Armenian soldier is not afraid of war; moreover, he is not afraid for his life, but for his brother, friend, father. In addition to inexpressible pain, the second Artsakh war also left thousands of stories about strength, will, self-sacrifice and heroism.

Such stories are also told at our University by the students themselves who took part in the struggle for survival. One of them, a student of the Faculty of Management, reservist Seyran Podosyan had already felt the horror of war on his skin once; he had also taken part in the April four-day War. This time he left for Artsakh with his cousins as a part of the Union of Freedom Fighters. He says that the young and the old went to the front for one purpose – to be with their younger friends at a crucial moment, to support them. But after getting there, the picture was different. “It seemed to us that we were more experienced, more even-tempered and knowledgeable, but the compulsory military soldiers were more mature and courageous, they did their job with honor; they were even the ones to encourage us from time to time.”

He took part in combat operations in Jabrayil and Hadrut. Although he refuses to describe the events he left behind a thick and blinding cloud of smoke, he remembers one case with warmth: “We were in the Hadrut regiment, the aviation was working, the situation was extremely dangerous. All of a sudden, one of the members of the Union came out of the hiding place and shouted, “Who will come with me to get some food?”

Another student from the same Faculty, Armen Apinyan, served for his Homeland in Jabrayil. He confesses that he had never seen such a war, a war where there was no contact battle, where the enemy fought with you not on the ground, in front of you, but in the air.

This war was also beyond anything to be imagined or envisioned for Razmik Muradyan, who did not leave the battlefield until the very last day. “We were in Aghdam, there were four of us, four friends who went to the frontline. The first feeling was fear of course. But it is pushed to the background once your whole consciousness is focused on staying alive,” he says, with certainty as strong as steel. “Our blood is victorious, just the circumstances were not favorable.” And now, he says, before the cherished victory, we must appreciate what we have, live the lives of the dead boys with dignity. 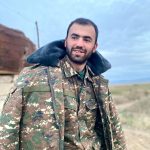 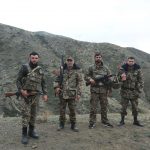