The members of the Scientific Council of the Faculty of Architecture congratulated Mr. G. Stepanyan on the new appointment and wished the best of luck for the new position. During the meeting, a perspective program for the development of the Faculty of Architecture was decided to be introduced over the coming two months. The acting Rector Yeghiazar Vardanyan as well as the members of the Scientific Council Karen Rashidyan, Emma Harutyunyan, Zara Mamyan, Ashot Kanayan made a statement and expressed gratitude to Sargis Tovmasyan for effective and fruitful work done over the last eight years as a dean.

During the meeting, the progress of the preparatory work regarding the upcoming academic year has also been discussed. 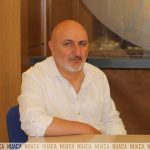 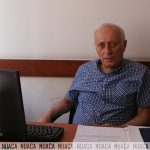 27.11.20
LET’S RECOGNIZE OUR HEROES
25.11.20
AN EXCEPTIONAL PERSON AND SPECIALIST ARTAVAZD ARZUMANYAN HAS PASSED AWAY
25.11.20
INTERNATIONAL CONFERENCE “CONTEMPORARY PROBLEMS OF ARCHITECTURE AND CONSTRUCTION” HAS COMMENCED
24.11.20
THE HERO ROBERT…