Presidential titles to our lectures

On May 28, the First Republic’s Day, the ceremony of awarding presidential titles and state medals took place at the residence of the RA President.

For their significant contributions, patriotism, expansion and strengthening of ties between Armenia and the Diaspora  a number of individuals were awarded by  the highest state awards and honorary titles for their effective work in the fields of education, science, healthcare, economy, arts, culture and sports.

Presidential awards were also granted to lecturers of the NUACA Faculty of Architecture. Mr. Arsen Arustamyan was awarded the title of the “Honorary Architect”, and Mr. Sirekan Ohanyan was awarded a medal of gratitude.

The “Honored Builder” title was awarded to the Russian citizen of the Armenian origins and the owner of the “Monarch” company, a partner and a friend of the NUACA, Mr. Sergey Hambardzumyan. 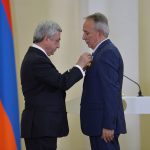 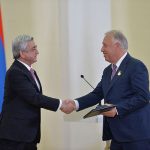