They witness that love towards architecture recognizes no age

“Alexander Tamanyan’s granddaughter, Gayane Tamanyan was my classmate. When we were at their home, we were taking off Tamanyan’s drafts from the wardrobe and watching them for hours”: love towards an architecture for Karen Rashidyants is born during school years. He told that all his notebook covers had the pictures of Opera, as he was constantly drawing. Over the years, the love towards the job has grown.  This year Dean of the Faculty of Architecture of NUACA, Sargis Tovmasyan and Chair of architectural design and design of the architectural environment, honored architect, Prof. Karen Rashidyants were the main jubilees of the University.

On occasion of their 70th and 75th anniversaries, Mr. Tovmasyan and Mr. Rashidyants were awarded “Jim Torosyan” and “Arthur Tarkhanyan” golden medals, respectively. With the consciousness that aging gives not only extra unwanted wrinkles but also wisdom, I decided to limit the conversation about age only by congratulating their anniversaries and awards. However, when Mr. Tovmasyan noticed with a smile and admiration that Mr. Rashidyants is only 10 years old multiplied by 7.5, I realized that age is not a sequence of numbers for them, but another interesting level of life: “The fact that every time I wake up and realize that I am going to introduce another architect to my students immediately brings me to life. The idea that people still need you, you are not exhausted yet and have something to say is energizing”. With this mindset, each day students’ favorite professor, Mr. Rashidyants goes to work to talk about literature, music, architecture, and noble feelings with students.

As Mr. Tovmasyan noted, he should work only with special enthusiasm. “Do you agree with me, Mr. Tovmasyan? Otherwise, it is not possible because architecture is love, devotion, and music. If an architect does not wake up and draw at night, he is not a real architect.” Mr. Rashidyants told and thought to himself that he is speaking too much. “Fortunately, you have much to say about architecture because it is a stunning art like a drug which in case of appearing a person cannot get rid of it.”

Mr. Tovmasyan noted. Perhaps the best eloquent expression to describe the mystery of architecture is mentioned by Sargis Tovmasyan, “Architecture is a God-given profession”. The explanation is as beautiful and convincing as the expression: “You can look through the window, from the top of the hill, from the sky and see creations of God and architecture everywhere. Architecture is the only thing that is permanent and is the continuation of the environment.” I noticed the change of Professors’ mood when I asked about the current atmosphere and colors of Yerevan’s architecture. The responses were brief but deep and optimistic. “Today, the architecture is in dull colors. The buildings do not match with each other and Yerevan became a city of “lonely” buildings. We hope that time will put everything in its places.

That is being said, skyscrapers may be built by following the style of western architecture, which is ridiculous and have nothing to do with development. The risk factor is high in our country and recalling that human is the absolute value of all times we should create buildings with the guidance of firmness, usefulness, and beauty. Further, we need to remember that each natural disaster threatens our destruction.

“Architecture should not be aggressive and vulgar, that is how the proper and environmentally friendly building looks like. It is permanent and you cannot tear and throw away like a picture in case of a bad result.” Mr. Rashidyants said and added that a building can physically wear out but morally it should be steady. Only this kind of architecture, witnessing the history of a particular period and human relationships can make people and architects pleased.

According to Karen Rashidyants, “Certificates, medals, and titles do not make an architect happy and become the reason for applause. A professor is real when others can tell about it without knowing about the existence of his medals. I think I am talking too much again, but that is alright Mt. Tovmasyan you are younger than me and you still have time …”

“I don’t have many goals, because I am already happy with my wonderful family, favorite job and good surrounding of people.” Karen Rashidyants explained. “One thing that I wish is having many grandchildren and as an architect, I dream about one common thing that eventually the architecture of the Republic of Armenia will meet the standards of safety, durability, and stability.” 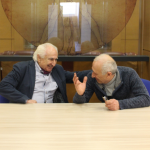 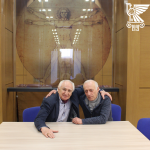