Highlighting the role and importance of Armenian army and in order to direct the future soldiers every year the Ministry of Defense of the Republic of Armenia organizes meetings with students of higher education institutions of Armenia.

Within this framework on March 16 at the National University conference hall of Architecture and Construction of Armenia has been held a meeting with the Chief of Personnel and Military Education Department of Ministry of Defense of the Republic of Armenia Colonel A.Davtyan, with Lieutenant Colonel Nalbandyan of Military Aviation Institute named after Marshal Armenak Khanperyants and with RA AF Chief of Department of Air Defense Forces.

The aim of this meeting with students, tomorrow’s armed forces officers,was the importance of the officer cadet trainings and the introductionof Terms of Participation.The Ministry representatives informed our students that after passing the one-year courses the young people would get an opportunity to serve in the Armed Forces of RA as officers on a contract basis for 3 years. The students received the answers to all their questions in warm atmosphere of this meeting. 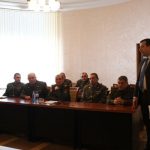 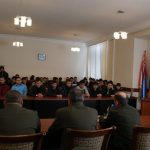 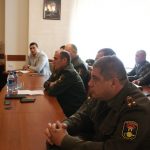 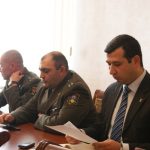