THE MEMORIAL OF THE DISTINGUISHED PHYSICIAN AND BUILDER COUPLE WAS OPENED

A memorial dedicated to the honored pediatrician Isabella Davtyan and her spouse, honored builder Vasak Khachikyan was opened at Mashtots Avenue in Yerevan on April the 7th.

All friends, doctors, architects and engineers, who attended the ceremony,  stated that the role of Davtyan-Khachikyan couple in the field of pediatrics and construction was truly immense.

The RA NA Speaker Ara Babloyan, the RA Defense Minister Vigen Sargsyan, Deputy Mayor of Yerevan city David Ohanyan, Rector of the National University of Architecture and Construction of Armenia and the President of the Builders’ Union Gagik Galstyan and other high-rank officials were present at the ceremony.

Welcoming the attendees, the NA Speaker Ara Babloyan mentioned that Isabella Davtyan’s role in pediatric medicine was huge. Yet in 1979, Yerevan Pediatric Clinic # 3 was re-organized to the Republican Children’s Clinical Hospital by the efforts of Dr. Isabella Davtyan and equipped with the most advanced medical apparatus of the time, hence becoming one of the best specialized medical institutions in the former USSR.

Acknowledging the path of the honored couple and their patriotic endeavors, Rector Galstyan noticed that Isabella Davtyan made a great contribution to the development of medicine and Vasak Khachikyan in the sphere of construction during the Independence Period of our country. He noted that due to Vasak Khachikyan and his successors the builders are well respected in Armenia.

It should be noted that the venue of the memorial was decided by Yerevan Municipality, while the initiative was made by the Public Health Organization. 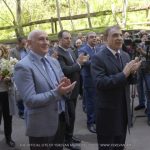 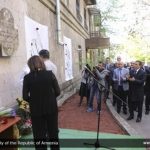 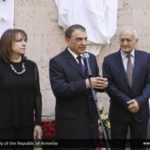 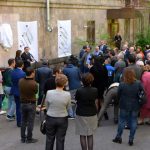 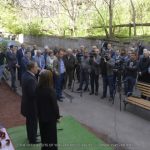 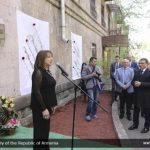 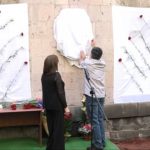