Rewarded with the «GOLDEN ARCHIDEA» diplomas

Our students traditionally return from the international competition with rewards.

The annual competition of architectural designs famous as the “Golden ArchIdea” was held from 20 to 23 April in the Tyumen city of Russia with the participation of the students of the National University of Architecture and Construction of Armenia, Germany, Poland, the Netherlands, Kazakhstan, Tajikistan, Belarus, Russia and other major universities of other countries.

At the 16th international competition of  “Golden ArchIdea” our University participated with 13 works, 8 of which received high ratings and the authors were rewarded with the certificates, 6 works of our students won the first and second degree diplomas. Our University delegation member,  the head of the NUACA Urban Construction Chair Zara Mamyan received a diploma for her report on “Urban Problems. Yerevan Yesterday, Today, Tomorrow “and the NUACA rector Gagik Galstyan was rewarded with the appreciation letter for his support and cooperation in the organization of the competition 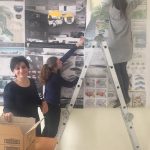 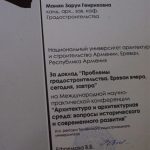 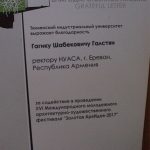 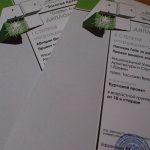 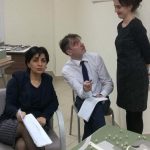