Our students as “the best students”

Yesterday was the award ceremony of “The Best Student” and NUACA students of Architecture and Construction Departments Arthur Musayelyan and Areg Asrabyan were among them.

The RA Minister of Education and Science Armen Ashotyan greeted the winners at the Armenian National Polytechnic University and mentioned that the republican contest initiated three years ago was aimed at revealing the best students, hence supporting and encouraging them. The Minister emphasized that the results of the contest show to our country and society who are our heroes of today.

The contest has been held since 2013 according to the spheres of natural sciences, medicine, humanitarian sciences, social studies, engineering, culture, sports and the Armenian studies. This year 39 students of 18 higher educational universities from the regions and capital city of the Republic won the contest.

The opportunity was given to all the 2nd to 4th year students of Bachelor studies and Master degree students who have accomplished their first year of studies in the state and non-state higher educational institutions. The contest had inter-university stage where the Rector approved the jury, represented by the deans of the faculties, heads of chairs, representatives of Student, Scientific and Rectorate Councils. Until October 20 the HEIs nominate a winner and send the details to the RA Ministry of Education and Science.

In the second stage the jury is approved by the RA Minister of Education and Science which consists of three Ministry representatives, three University students, four university organizers of the contest, and one member of the Armenian Youth Foundation. This committee selects the first, second and the third -place winners from each sphere till December 10 based on the maximum points while in the case of equal points the academic excellence prevails. In the 2015 contest the winners were awarded with the certificates and nominal scholarships: 440.000 AMD for the first, 228. 500 AMD for the second and 200.000 AMD for the third places. 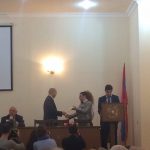 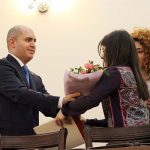 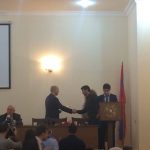