THEY EXPERIENCED THE WAR ON THEIR SKIN

Moving around, waking up in the morning and looking at the Sun seem pointless and ordinary during peace, but it’s like a miracle during the war. Reservist Hovsep Stepanyan, a second-year student of the Faculty of Design, confesses that in this war the function of a man was to protect himself from the strikes of the weapons that we had only seen in films. “You should have at least survived to help your friend survive,” tells Hovsep remembering how they saved a doctor’s life in the shelter. The doctor was about to leave when all of a sudden my friend held his hand and said: “Doctor, doctor, just a minute, let me ask you a question,” and right at the moment a UAV exploded next to the shelter. Had he come out a minute earlier he wouldn’t have survived,” today Hovsep already remembers it with a smile on his face.

The story of Arthur Harutyunyan, a senior student of the Faculty of Design, is also added to the list of bravery of our soldiers. Although air-raid siren is for escaping and hiding in a safe place, as Arthur tells, it’s nowhere to be compared with the sight of free fall of a plane. “We were unloading trucks when the air-raid siren rang, but instead of escaping, we stood watching the enemy’s exploding plane,” Arthur doesn’t hold in his excitement.

It is difficult to decide where the borderline of “real” and “unreal” is in the battlefield. Death and life were walking hand in hand hinting secretly, “If you go forward, you will become a martyr, if you go backward, you will die.” But nothing was horrible for our hero. Tigran knew he could die or get wounded. “There is always an opportunity for a man to choose, right? To choose the good one, the better one, the best, but during the war your choice is measured by the different degrees of “bad”, but it is not saddening as well. You realize why you are going through that hell,” confesses reservist Tigran Hovhannisyan, a part-time student, designer, whose facial muscles still become tense because of pain and regret when uttering a word about the war. He smiles only when remembers his friends, those who survived. “When I arrived in Jabrayil, my groupmates rang me up and told me that they were on the borders of Armenia. I was so happy for them…” Then, amid non-stop fires and smoke, another reason for happiness was the TV. “Yes, do not get surprised. When we moved from Jabrayil to Ishkhanadzor there was a small TV in our shelter.”

He categorically refuses to talk about his participation in combat operations, what he has gone through and what he has experienced. The photo is out of question. 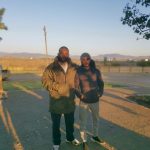 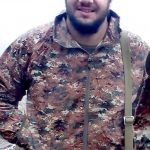 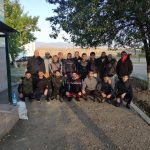