Chair of Languages of National University of Architecture and Construction in Armeniawas acting from 1936 when the lecturers teaching Humanities in mainly construction departments of Yerevan Polytechnic Institutewere united into one subdivision. Later during expansion of Alma Mater this subdivision was divided into two parts: chairof Russian Language and chair of Foreign Languages.

Theheads of chair of Russian Language were L.S.Istomin,A.P. Hovhannisyan and N.B. Nersisyan.

Thechair constantly worked for creating educational, methodical and scientific literature. A productive work was conducted especially in 1975-1991 when the chair was headed by PhD, Associate Professor N.B. Nersisyan.Instructional manuals were prepared on all specialties of the institute. Numerous scientific works were published. “Russian Language for University Students”textbookbyN.B. Nersisyan and N.A.Gevorkova, as well as educational collectionsof professional texts in Russian were published.

Thelecturers of the chair actively participated in the republican scientific events. With N.B. Nersisyan’sparticipationthe “Russian Language” textbook for the ASSR universitieswas published which is used to date. In those years, the quality of teaching staff of the chair was increased. 30 percent of chairstaff had scientific degrees.

Good traditions were established in the chair of Foreign Languages as well. The chair staff displayeda number of new events, especially when the chair was headed by PhD, Associate Professor I.S.Beletckaya and PhD, Associate Professor A.R. Isahakyan.New methodical and educational literature was prepared.The first attempt was made in Armenia to use the Lozanov’s famous method in foreign language teaching. The chair established scientific relations with numerous centers, chairs and individual scientists of the USSR and foreign countries.

In 1989 during separation of Yerevan Architecture and Construction Institutea part of these chairs was separated from YSI andjoined the newly formed university structure.PhD, Associate Professor P.A. Melikyan was appointed as a head of chair of Russian Language andPhDN. Manasyan – as a head of chair of Foreign Languages. A year later P.A. Melikyan moved to Russia. Acting head ofchair of Foreign Languages was Ts. Tsovyan and the acting head ofchair of Russian Languagewas PhD, Associate Professor N.A.Gevorkova.

In 1992 these chairs were united the head of which was PhD, Professor V.V. Madoyan.

The chairhas an experienced teaching staff which makes serious effortsto raise the level of training course.

Started from 1990in connection with the changeof Russian language teaching conditions the chair is continuously revising its educational programs and teaching materalbringing it into linewith new requirements.

Great attention is paid to teaching of foreign language. In addition to activity aimed at creation of supplementary educational literature, the lecturers and students participate in various international events.In 2000-2001 Professor V.V. Madoyan participated in 5 international conferences and in 2001 deliveredprofessional lectures in USA and France.

In2000 the lecturer of chair E. Babayan published “Countries of the World” (practice I, II) instructional manual.

In 2002-2004methodical manuals were published for students of correspondence courses on all languages that are taight in the chair.

Unfortunately,due to hard financial conditions,some instructional manuals prepared for printing which are aimed at improving professional foreign language teachingremainunpublished, although they are usedin electronic version. These are the Acting Associate Professor of the chair,PhD V.Nazinyan’s“Russian Language Manual for Foreign Students” and English, German, French instructional manuals.

In 1999-2000 Professor V. Madoyan published “Essays on Theory and History of Russian language” (M. 2000), “Questions of Lexicology and Grammar” (M. 2000),“German-Russian Associative-Formal Dictionary” (Yerevan, 1999), “Scientific Work: principles of writing and design” (Yerevan, 1999), etc. V.Madoyan’s works found a broad responsealso beyond the bordersof our republic.In the field of general linguistics he proposed the idea of comprehensive analysis of language phenomena: each phenomenon was presented by him in two linguistic levels:communication and original language, he introduced the idea of an equivalent contradictionwhich he also used incoordinationofmodification of Indo-European languages and in word explanationin explanatory and bilingual dictionaries. He formulatedthe method of inclusion according to which the characteristics of homogenous units can be also used indetermination and formulationof language phenomena.

R.Arakelyanis alsothe Armenian translator of O. Wilde’s “The Picture of Dorian Gray” (Yerevan, 1972), S. Maugham’s “The Happy Prince and Other Tales”, “A House of Pomegranates” artistic works.In 1996 he published “Byron and the Armenian language” booklet.

The press has repeatedly reffered to the lecturers’ works of the chair of languages.Extensive articlesare published about Professor V. Madoyan in A. Yudakin’s“The Leading Linguistics of the World” (M. 2000),“Who’s Who in Modern Rusistics” (M.-Helsinki, 1994)and in “The Armenian Concise Encyclopedia” (v.3, 1999). 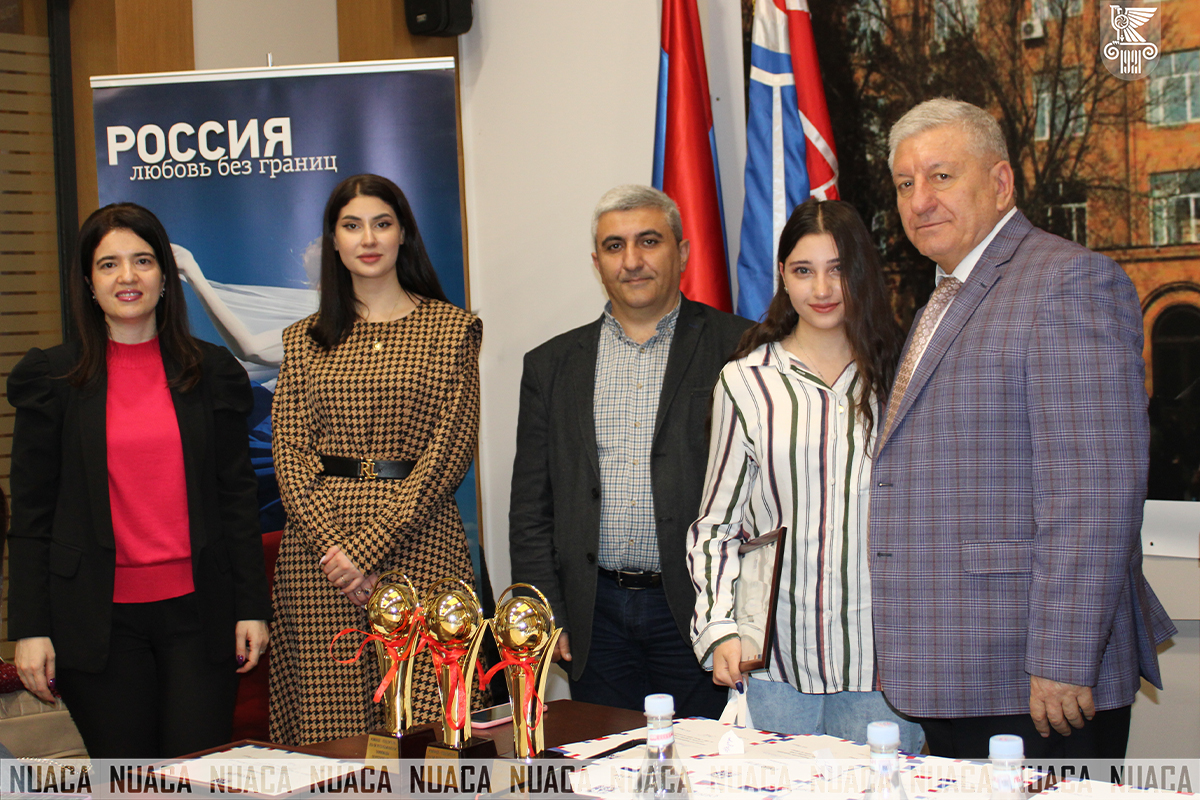 NUACA STUDENTS ARE THE WINNERS OF REPUBLICAN OLYMPIAD IN  RUSSIAN LANGUAGE

The results of the 7th Republican Student Olympiad in Russian Language were summed up...

60 YEARS WITH A PEN IN HIS HAND